Beam Bounce is part of an ongoing project, a collaboration between the Museum of Life + Science (MLS)(Durham, NC, USA) and Professor Todd Berreth, Art + Design, called Math at Play.

The goal in this particular collaboration is to develop a series of play-based interactive applications which address the potential of body-scale interactivity, immersion, social problem-solving, and embodied cognition, to informally impart foundational math concepts. 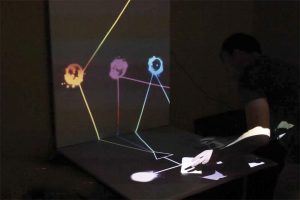 The latest development in this effort is the design of a physical installation — a technical platform which would conceivably host a variety of interactive experiences and experiments. The current installation being developed would stretch over both floor and wall space, using digital projection and computer vision to create an immersive environment which would respond to a wide variety of input from the users exploring and interacting with the installation.

Beam Bounce is a cooperative game-based experience being developed as an initial exploration into the affordances granted by such a space. Players work together and experiment to discover the properties of an abstracted game world. This world is filled with simplified light beams which reflect off of various objects, including real, physical objects which can be picked up and moved around by players. Players are capable of manipulating the light beams by strategically considering the position and rotation of these objects. In this manner users have the freedom to create visually interesting patterns of their own design, enjoy the emergent properties of the game’s many components, and cooperatively solve puzzles.