This project investigated the spatial and environmental history of the establishment of the Iguazú National Park in Argentina and the Iguaçu National Park in Brazil. The parks were created in the 1930s in a region of tropical moist forest straddling the border of the two countries. Through the use of a wealth of historical maps, aerial photographs, and satellite imagery, our project assessed and compared the effects of colonization and conservation policies on these two protected areas and their surrounding landscapes from the 1930s to the 2000s.

History of the project – The project started as part of Frederico Freitas’ PhD dissertation completed in 2016 at Stanford University, and continued as Dr. Freitas moved to NC State. The project wrapped up with the publication of Freitas’ monograph Nationalizing Nature: Iguazu Falls and National Parks at the Brazil-Argentina Border, (Cambridge 2021) 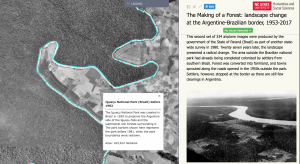 Interactive Maps (2018)—The Making of a Forest: landscape change at the Argentine-Brazilian border, 1953-2017

This series of interactive maps are a sequel to the ones launched in 2014.  They show deforestation and reforestation in national parks at the border between Brazil and Argentina, between the 1950s and the 2010s. They use as source erial imagery unearthed from Brazilian archives and satellite pictures, including some from US spy satellites from the 1960s. They show the impressive environmental change occurring in almost seven decades, when this borderland area went from being a dense of subtropical rainforest to become a sea of small family farms as thousands of settlers moved into the area. They also show the effectiveness of national parks as a protection against deforestation.

This project was carried out with the support of NCSU’s GIST Online Capstone Experience Program.

In this video, Dr. Freitas discusses the use of historical satellite and aerial images in the research of his book.

The Weapons Frieze of Trajan’s Forum: A Tangible Interaction Landscape Change in Brasília