This project will study changes in the landscape in the Federal District (DF) of Brazil. The Brazilian government created its new DF as a federally controlled state in the late 1960 to harbor its new modernist capital, Brasília. 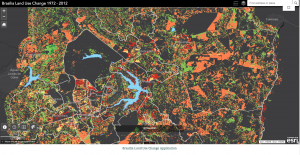 This preliminary study carried out with the help of Samuel Franklin on land cover change in Brasília and its Federal District (DF) between the 1970s and 2010s. The DF is a territory of 2228 square miles carved out of the neighboring state of Goiás in 1959 when Brasília was built. Similar to the Federal District in Mexico and the District of Columbia in the United States, the Brazilian DF was created as a way to create a federally controlled subnational territory that would not compete with the existing states. Since its creation, the DF was endowed with a series of protected areas that aimed to preserve its original landscape, the South American tropical savanna, also known as Cerrado.