“Story-Go-Round” is a physical development platform for producing augmented digital experiences, designed as an classroom or studio assignment to tell stories through interactive control and gameplay via circular rotating sets. We built a miniature mechanical and replaceable “carousel-like” stage linked to a game engine, which controls the rotation using a motor as well as streaming live camera feeds of the stage directly into the game environment. Story-Go-Round is a mythotrope, meaning “story turning”, a term coined by us as a reference to a zoetrope, a historically significant cylindrical pre-film animation device developed in the 19th century.

The assignment is inspired by the historical aspects of replaceable computer media such as game cartridges, and early animation devices such as the zoetrope and animated concertina. The stage component is open to continuous physical interaction for an evolving set design, like the process used in stop motion animation set building. The assignment asks students to develop a seamless circling narrative by understanding material and spatial choices and their impact as seen through the camera as well as inside the game engine as logically meaningful and visually important components. The narrative can evolve around a defined theme, or simply focus on engaging and innovative play. 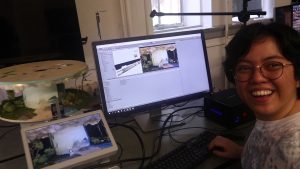 In groups, students complete the stage design by curating resources and assembling found objects, fabricating custom environments, through hand-skills, digital fabrication and simple electronics. They then proceed to produce digital assets, animation and interactivity, including and not limited to game mechanics, control schemes and augmented reality. The assignment lowers the intimidation factor by reenacting the forgiving process of making dioramas and integrating this with foundational skills in game design and programming, and the breadth of digital making. The benefit of this assignment is to think outside the box and leave the comfort zone in order to innovate, collaborate, and learn. 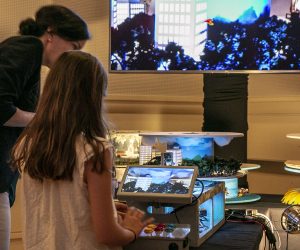