The Urban Panorama Project is testing methods to assess urban change by introducing two novel elements in the craft of urban historians: 1) the use of images of streetscapes as primary sources; 2) the use of computer vision and machine learning in the analysis of these images.

Neighborhood Effect and Streetscape Change in the Great Recession 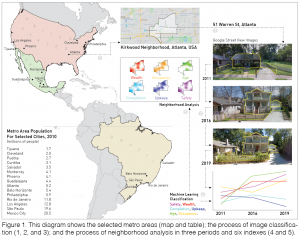 In its current state, the Urban Panorama project plans to study the effects of the recent global economic crisis on the urban landscape. Over the past decade, the Great Recession generated enormous consequences for most countries’ economies and societies. Little studied are the effects of this crisis on the urban landscape. This project uses artificial intelligence, computer vision, and machine learning to analyze millions of images of urban streetscapes before, during, and after the Great Recession. Data from the images will be correlated with socioeconomic GIS data, offering a multidimensional view of urban change. We compare the visible effects of the crisis in fifteen metropolitan areas in the three largest countries in the Americas: The United States, Mexico, and Brazil. We select and analyze streetscape data from residential, commercial, and mixed-use neighborhoods from within each metropolitan area. By studying these fifteen cities, we will understand how global economic upheavals affect the built environment of cities at the street and neighborhood levels. Our selected group of fifteen metropolitan areas offers a diverse array of population size, density, and economic activity. They allow us to understand how development and underdevelopment, industrialization and deindustrialization, and centrality and peripherality in the international system, determined the impact of a global crisis in different urban neighborhoods.

There are many ways of understanding urban and spatial change, from the close reading of memoirs of historical characters embedded in particular locations to the interpretation of the legislation, urban plans, and reports produced by private developers and state officials to the plotting of historical data and the subsequent analysis of patterns through naked-eye and statistical methods. In recent years, the latter approach has become ubiquitous thanks to the popularization of GIS in the humanities and social sciences. GIS has allowed scholars to aggregate data through location in space in the form of points, lines, and polygons. However, there is a bias implicit in this method. GIS-based approaches understand urban change from the air, reproducing the point of view of the planner.

Our line of inquire aims to introduce a new dimension in the historical assessment of how cities change. By changing the focus from geometric parcels, as seen from the air, to images of streetscapes, as seen at the street level, we intend to move closer to the perspective of the people experiencing change in the landscape of the city as they traverse its streets and avenues. To achieve this goal, our project will combine GIS with machine learning and computer vision technologies to geolocate, analyze, and interpret historical images of urban landscapes.

Story-Go-Round: A Mythotrope As An Augmented Reality Education Platform The Weapons Frieze of Trajan’s Forum: A Tangible Interaction